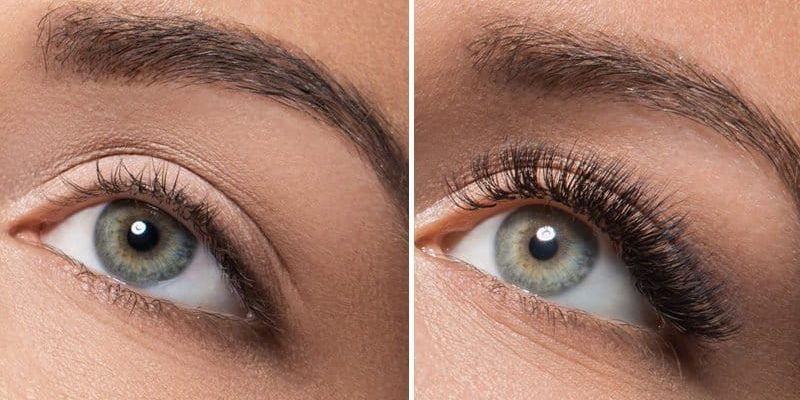 You may think that false eyelashes are a modern invention, but not so. Falsies have been known to bat their way into and out of fashion in several different forms over centuries. From ancient Romans to the modern, fashionable woman, false eyelashes have been a consistent beauty staple.

Ancient Roman women’s fascination and desperation for long, false eyelashes is attributed to the writings of the naturalist philosopher Pliny the Elder, who claimed that long lashes were a sure sign of chastity and youth.

Women of the time strived to have lashes as long as possible, grazing their cheeks in youthful, yet chaste whisps. Not much is known of their application from this time; however, women of ancient Rome were prolific with mascara and other makeup applications, so we can only assume that there were any number of ways they could achieve the desired look.

After the medieval time of extreme plucking was done, brows and lashes slowly made their way back into modern fashions.

Women of the Victorian era brought the false eyelash look back into fashion but some in more gruesome ways than others.

When adhesives failed to adhere the hairs to women’s lids, they sometimes opted for more permanent means of securing the lashes to their eyelids by sewing them on. If this gives you the heebie jeebies, you’re not alone.

Needless to say, this fashion trend was not for the faint of heart back in the day.

The false lashes that we know today most resemble those that were created in 1911 by Anna Taylor, a Canadian beautician. She used a very thin, sheer fabric to sew the lashes onto (think of a lace front wig, but for your…eyes) and then applied the thin fabric to ladies’ lids.

In 1915, the famed Karl Nessler picked up the lash fashion invented by Taylor, and promoted them at his New York City salon. He hired chorus girls to bat their lashes at would-be customers, imploring them to come in and upgrade their eye game.

The following year, in 1916, actress Seena Owen famously had “supernatural” eyelashes that grazed her cheekbones in the movie Intolerance. The film’s director, D.W. Griffith, insisted that the wig maker for Owen superglue the lashes on with a spirit gum.

While the effect was indeed magical, Owen suffered a massive allergic reaction during filming.

The Rise and Fall … and Rise of False Eyelashes

Since their more modern iterations in the 1910s, false eyelashes have risen and fallen out of favor over the decades.

In the 1920s, a New York Times columnist surmised that women who wore false eyelashes were of less than reputable stock, sending false eyelashes out of fashion faster than you can blink.

A decade later in the 1930s, Vogue editors brought the falsies back into fashion with their full page ads featuring fully lashed ladies. Hollywood starlets carried on the tradition of sporting luscious lashes until the late 1950s.

From the 1960s through the mid 80s, lashes fell out of fashion once again as the natural, free spirit look of the 60s carried through the decades.

It wasn’t until the late 1980s that false eyelashes started to make a comeback. Singers and starlets flaunted their long lashes on red carpets and beyond, bringing their popularity back in full swing.

As proof, since the early 2000s, false eyelashes have truly hit the mainstream. No longer are false lashes a “special occasion only” addition to one’s makeup routine; for many they’re a daily application.

When you flaunt your luxurious lashes, think of all the ways this beauty trend has evolved–and thank your lucky stars we’ve found much easier ways to put those puppies on our lids.