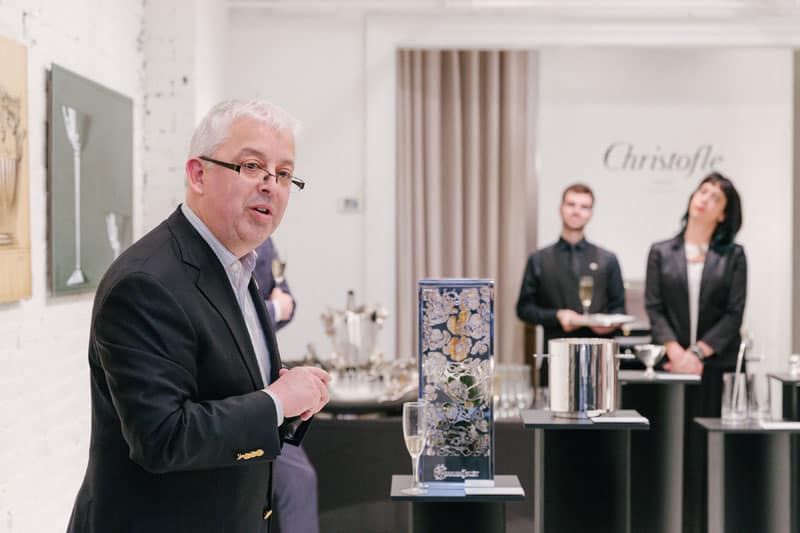 Nicolas Krafft is a Managing Director for Christofle, the French luxury silver and tableware purveyor. He is responsible for overseeing operations in France and the UK territories.

Nicolas Krafft says his job at Christofle is more than just helping to drive sales. He feels the company’s job is also to teach customers how to enjoy Christofle products, whether that’s a silver wine cooler or an elegant Champagne flute. He credits good customer service for keeping the Christofle brand relevant, every after nearly two centuries. Say Krafft, “We never forget our customers. We truly create a strong relationship with our customers”. He feels that these bonds also help his team to learn about customer needs and what type of products they’d like to see in the future from Christofle.

Krafft feels the essence of the Christofle brand is “all about lifestyle” and how to use the company’s products to live a more elegant and luxurious life. He admits that one of the challenges to having a luxury brand is finding repeat customers. After all, most of Christofle’s products last for generations. To help address that challenge, Krafft and his team have taken to social media, including having a “Tweeter” account, as Krafft calls it in his charming French accent. The company has also expanded its product line to include jewelry and home decoration items, which consumers are more likely to change than their silver and glassware.

Christofle hired Nicolas Krafft in 2002 and he has gone on to serve as CEO for the Americas, managing director for Asia-Pacific, and as president and CEO for Christofle’s North American subsidiary. He previously worked for the AELIA Group, where he was a general manager.

Nicolas Krafft is a graduate of Paris Pantheon-Sorbonne University, where he earned a master of economics degree. He lives in Paris.

Krafft has an interesting hobby. He is a master of the art of “sabrage”, the ancient French method of uncorking a bottle of Champagne using a saber. Says Krafft about sabrage, “If you do it properly, with a lot of panache, it is impressive. If it’s well done, you don’t spill any champagne.” He explains that only Champagne can be opened using this method. Other sparkling wines do not have the right mixture of bubbles for it to be safe. To honor this tradition, Christofle sells a silver Champagne saber, complete with a sabrage lesson by Nicolas Krafft himself. The price tag on that experience? A cool $35,000.

Christofle has a long, illustrious history, both in France and abroad. The company was founded in 1830 by Charles Christofle and was an early pioneer in silver plating. It was one of the first companies to open a boutique store inside of a US department store, when Marshall Field invited the company to partner with them in the late 19th century. The U.S. market continues to be important for Christofle, thanks in large part to the work of Nicolas Krafft. The Christofle store on 57th Street in New York City is the company’s second largest producer.